Urban transport authority bosses have issued a warning about funding for the free bus pass for disabled , and elderly.

Transport chiefs from the country’s largest provincial cities say funding the scheme means spending on other transport services could face a cut of 75% in 10 years’ time because although state funding is being reduced, costs are increasing.

They say Government funding for providing the bus passes will be cut by 27% by 2014-15, despite the fact the cost of paying for it is rising.

Funding the scheme is said to now take up around half of all spending by the regional transport executives.

The transport bosses insist they have little influence over costs, while being legally required to fund it.

Because general funding for transport is also being slashed, the authorities insist the rising cost of the free bus passes means money supposed to be for other areas is having to be used. By 2022 they say frontline service funding is likely to be cut by three-quarters.

But David Wood, who chairs the group of six transport authorities, said the concessionary travel benefit for disabled and older people is hugely successful and that people want it to be maintained.

He added: ‘However, it cannot be right that the cost of providing what is a national statutory scheme, determined by national government, should create such a heavy funding burden for transport authorities in a way that threatens the future of the services that we provide for all members of our communities, including older and disabled people.

‘There will be little point in a free pass if the bus services that older people are using have to be withdrawn to pay for it.’

Last year we put in place reforms to help local authorities cut the costs of concessionary travel schemes and these reforms are already starting to take effect. 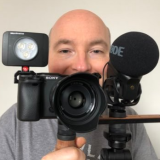 I'm a Presenter/Speaker/Voice-over based in Bristol, UK. I've been on Radio, Television and on online webcasts broadcast all over the world. I have worked with major clients such as BBC, ITV, Channel4, FIVE, CBS, NBC, IDG Expo, Sound On Sound Magazine and many more! Visit the website at: www.dsoundz.co.uk